Like many kids across the country, my 4-year-old son received a Disney/Pixar Monsters Inc. pinball machine for Christmas this year. Not from us, but from well-wishing friends. The machine came out of the box quickly, and I started the panicked hunt for four C-size batteries and a small screwdriver. Got the batteries in, hit the switch, and nothing happened. I figured he could play with it in silent, non-lit-up mode for a while. He decided otherwise, and started a time-proved technician trick, banging the sucker on the floor. Managed to break the underside battery door off within the three bangs we let him get away with. So now it's unquestionably broken, and I'm off for the Great Big Bag of Pinball Tools. Did I mention the gift-givers are still here, watching proudly as my son enjoys the present they carefully picked out for him? At least they've got their own 4-year-old, so they understood.

First step in diagnosing something electrical - make sure there's adequate power. I stuck the voltmeter on the scrounged batteries individually and as a set - everything looked good. Didn't see mention of fuses, so I didn't look for any to be blown. 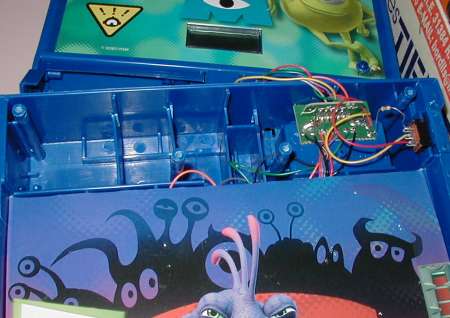 Step two - remove the head. Four screws hold the fold-down head onto the back of the body. Take them out, and the head and hinge lift off cleanly, exposing the complex power electronics and interconnect boards in the tail of the cabinet. That's the last of the hardware - everything else just pops out. Very easy for maintenance. 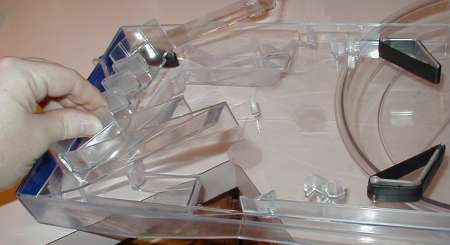 As long as I'm this far, might as well pull the playfield glass. It lifts up an inch in the back, then slides to the rear, releasing from the front tabs in the body. The playfield and four schpoing bumpers (they don't pop, but at least they're lit) are now clearly accessible, along with the cabinet wiring harness. The clear ramp and upper mini-playfield also come up with the playfield glass, making any future playfield/ramp cleaning look effortless (compared to Medieval Madness or CFTBL). 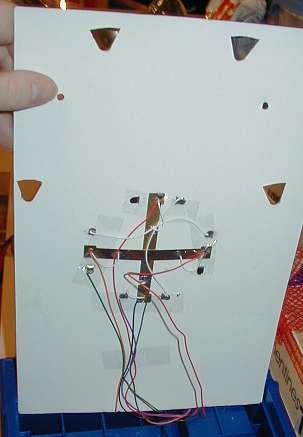 The four flipper bats lift right off the playfield - no annoying hex-head screws here! The two lower flippers have rubber inserts for better bite, but they don't appear to be replacable separate from the plastic bats. The two non-powered slingshot rubbers seem to be a bit more servicable, as well as the launch-rebound rubber at the top left corner.

Lifting the playfield reveals the flat-strip conductors used to interconnect the schpoing bumper springs electrically, plus the few wires running to the two pairs of lights inside the schpoings.

The flippers' action is sensed with direct-acting leaf switches like older solid state games (Firepower etc), before the days of Funhouses' power-sensing-opto and later opto-triggered Fliptronics boards. Mechanically the lower and upper flippers on each side are tied together, so they both act at the same time, rather than the delayed lower/upper effect you get on Funhouse and later multi-flippered games. 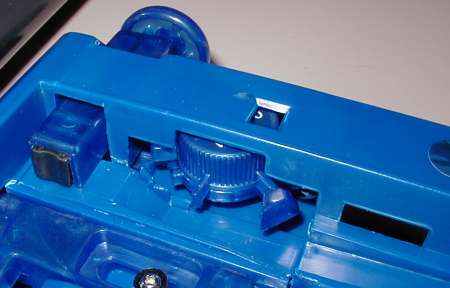 The ball trough has apparently inherited some design problems from past pin manufacturers. Sometimes the ball will get caught behind the outhole kicker, requiring a vigorous inverted "Etch-a-Sketch" style shaking to get the ball back into play.

Here you see (from the backbox looking at the plunger) the plunger with rubber tip, the ball-in-play indicator, stuck somewhere between 3 and 4, and the outhole kicker that serves up the ball when you pull back on the plunger. Bottom-left corner of the photo is the right flipper mechanism. 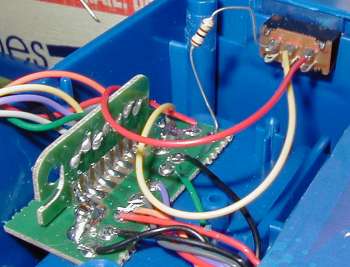 Back to the original power problem. More voltmeter testing showed power getting cleanly to the cabinet interconnect board, and the red wire carried +V over to the power switch. (Battery terminals come up from the holder under the board, and solder directly to the board.) But neither position of the switch caused the game to start. Aha, a defective switch. Shorting across the normally-open contacts of the slide switch did start the machine, with a garbled display and some weird sound effects. I was looking for the phrase "FACTORY SETTINGS RESTORED" but didn't expect much from a 5-digit 7-segment numeric LCD. 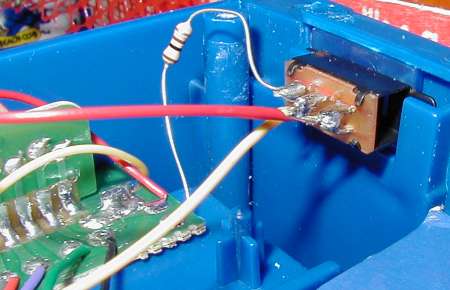 I realized the designers had put in a 6-terminal DPDT slide switch, with only half the switch in use, so rather than replace the switch, I tested the other half (which worked) and then bent up the second half's terminals and soldered the switch into being a SPDT switch. After the wire insulation stopped burning back from the soldering heat, I put the batteries back in (hey, I didn't want to get electrocuted!) and it powered up just fine, using only the switch. Of course, I had to apply a few layers of duct tape to keep the battery compartment door in place, but it seems to be holding up pretty well, two weeks after the repair. 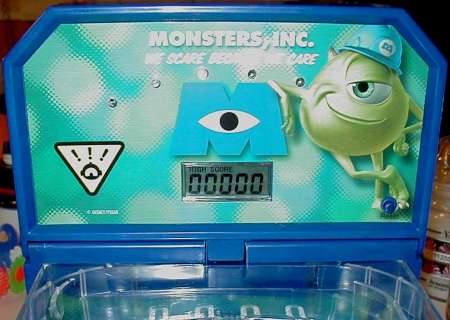 Attract mode is silent, with just the six flickering red LEDs on the backglass. If you hit the flippers, you'll get noise, but nothing compared to a real game. You also have to press the backglass RESET button to start a new game, with sound and scoring. The ball-in-play indicator isn't working too well either (related to the trough problems) but I think I can trust my 4-year-old to keep count and not cheat too much.

Speaking of cheating, there doesn't seem to be a plumb-bob tilt sensor in this game, though we observed the operation of the slam-tilt first hand. If you pick up the game and slam it on the floor, the weight of the four C batteries overcomes the battery compartment door and the batteries fall out, effectively ending your game.

Overall, the sound and lighting package were a bit weak, GI was non-existant, but the playfield graphics were crisp and clean. The manufacturer used a good heavy grade of chipboard, laminated with a bright-white gloss coating suitable for full-color offset printing. The lack of solenoids and under-playfield tunnels leads me to predict a much lower amount of cleaning required than on my other games, like Twilight Zone.

Back to the PinThugs home page